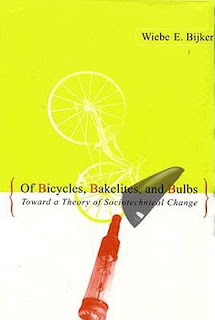 In Of Bicycles, Bakelites, and Bulbs: Toward a Theory of Sociotechnical Change, Wiebe Bijker uses cases studies on the development of the bicycle, Bakelite, and GE's fluorescent lamp to show that technologies have politics, but like society, they are socially constructed; "artifacts are not only shaped by the power strategies of social groups but also form the micropolitics of power, constituting power strategies and solidifying power relations."  Power relationships materialize in technologies, and the technologies themselves become embedded in politics, so exploring the social construction of particular technologies reveals the politics of technology and the relationship between technology and power.

Each of Bijker's three case studies reveals a piece of his theory of sociotechnical change:

With the bicycle, Bijker shows how technological change is actually a social process, so the context of the invention and the meanings applied by social groups had more of an impact on the bicycle's design than did its intrinsic technological specifications.  Relevant social groups assigned meanings that favored some designs over others, and the bicycle's interpretive flexibility meant that particular designs "worked" while others didn't largely because they had been accepted by relevant social groups.  Once a particular design (the Safety bicycle) was accepted by a majority of people, bicycle design had achieved closure, and both design and meaning became stabilized.

With Bakelite, Bijker shows how even technologies that seem to come from "unique individual ingenuity and creativity" are actually linked to larger sociocultural processes.  Bakelite developed out of a particular "technological frame," a configuration of knowledge, goals, values, and artifacts that is structured by social, economic, scientific, and technological conditions, all of which went into the invention itself.  In order to understand the politics of a technology and the structure of creativity, we need to take a contextualist approach and embed the inventor in his social context.

Bijker uses the development of the GE fluorescent lamp to discuss power for constructivists.  Power is an explanandum that has two aspects: a semiotic aspect that focuses on fixing an artifact's meanings in a particular way, and a micropolitical aspect that focuses on the interactions among relevant social groups in a technological frame.  Explaining or revealing power structures helps explain the political order of a particular combination of technology and society, so that the technological artifact is like a material incarnation of a particular power configuration.

Bijker then uses the concepts from these case studies to argue for a liberatory technopolitics.  Instead of a divide between society and technology, he posits a single sociotechnical ensemble, a bundle of machines, artifacts, and social formations where the technical is always socially constructed and the social is always technically constructed.  While he has no answer for how an understanding of sociotechnical politics can lead to a more democratic culture, he hopes that revealing the structures of power can help humans locate sites of agency.