18: Emily Thompson's The Soundscape of Modernity 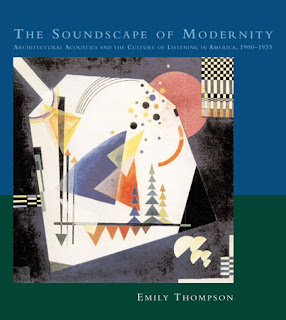 Emily Thompson calls The Soundscape of Modernity "a history of aural culture in early twentieth-century America," and lest you wonder (as I did) what on earth aural culture is and why anyone should care about it, she spends the book carefully reconstructing both the new kinds of sounds that came out of processes of modernization AND the new ways of listening that were shaped by those sounds.  The result, she argues, is a more finely-textured understanding of what it was like to live in the US at the turn of the century and thus a greater understanding of how technological change and culture interact.

Thompson uses a wide range of sound- and listening-related cultural and spatial forms, from orchestra halls to acoustic tiles to jazz to noise abatement commissions, to argue that modernity brought new sounds and thus new ways of listening.  The examples that truly got me, however, were the acoustically-engineered spaces that bookend her narrative: Boston's Symphony Hall, completed in 1900, and New York's Radio City Music Hall, completed in 1932.  These two buildings came out of radically different understandings of both sound and listening, and they thus show just how far acoustics had come in just 30 years. 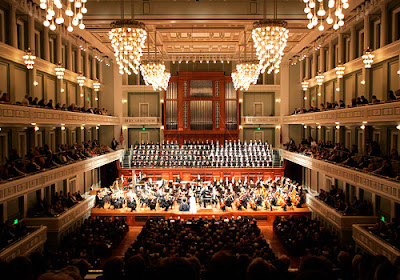 When Symphony Hall was being built, the architects wanted an auditorium that could compete with the greatest halls in Europe, so they hired a Harvard physicist, Wallace Sabine, to figure out a way to predict the acoustical quality of rooms.  Sabine proceeded empirically: he asked the conductor of the Boston Symphony Orchestra where the best halls were (Vienna and Paris, I think), then went to those halls, inventoried all of the surfaces in them (plaster, cushions, glass, wood, etc), and performed a series of reverberation tests where he blew into an organ pipe and counted the seconds until he couldn't hear the sound anymore.  Using these data, he derived absorption constants for materials commonly found in rooms, and with these he developed a formula that related expected reverberation to the total surface area of materials in the room.  And from here, he was able to help the architects design a room that sounded as much like the great European halls as possible: live, rich, reverberent, and just as much an instrument as those in the orchestra. 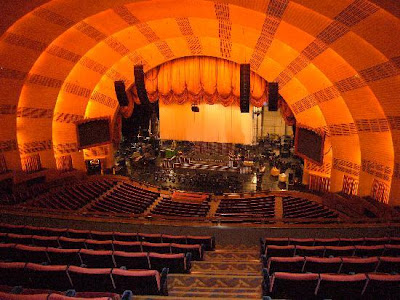 Built roughly 30 years later, Radio City Music Hall was an entirely different beast.  In the intervening decades, acoustical engineers had developed three new technologies: microphones, loudspeakers, and construction materials that severely restricted reverberation; auditoriums now had substantially less "noise," and listeners had come to prefer clear, efficient, electroacoustically-produced sound over live unmediated sound.  In fact, rooms were now so dead and loudspeakers/mics so imperative that Sabine's formula was no longer precise enough to predict the acoustics of rooms.  Thus, Radio City Music Hall was designed not with Sabine's plaster/glass/wood-based formula, but with Carl Eyring's new synthetic space/synthetic sound-based one.  And it worked: if people sitting at the very back of the 6500-seat auditorium could barely make out performers on stage, the hall's vast system of loudspeakers ensured that they heard their voices just fine.  It was a new kind of auditorium for a new mass audience.

In other words, as what people listened to changed from live musical productions (and other organic sounds, like dogs barking, policemen whistling, people talking, etc) to synthetic re-productions via loudspeakers (and other non-organic sounds, like trains, cars, construction equipment, etc), they came to expect and prefer the mechanical over the natural, the clean re-production over the acoustical messiness of the live show.

I might argue that the cause and effect in this process were a bit different, but otherwise her argument has a strong resonance today: how many times have you gone to see a band... and come away thinking that well, that was all right, but they sounded better on their recording?

Posted by kirstenatx at 1:38 AM